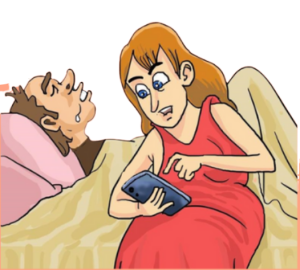 The wife checked her husband’s phone and found these names:

‘Lady of my dreams,

She got angry and called the first number to find out that was his mother.

Then she called the second number to which his sister replied.

When she dialed the third number her own phone rang.

She cried until her eyes got swollen because she had doubted her innocent husband,

so she gave him her whole month’s salary to make up for it.

It Doesn’t Matter What You Wear