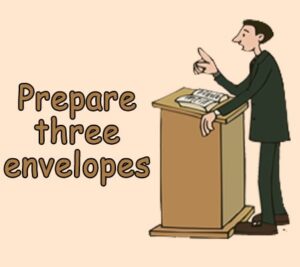 The new preacher moves his things into his new office and comes across the former pastor, taking his items out.

The former pastor says, “I left three envelopes in your desk. If you have any trouble, open them.”

Well, of course the new preacher thinks he will never have to use them, but in his youthful enthusiasm, he tries to change the order the kids march in during Vacation Bible School.

Well, this makes the workers absolutely furious and there is a lot of ugly talk about the new pastor. He remembers the envelopes and opens the first one.

It says, “You haven’t been here long, but you decided to make a change in the Vacation Bible School; now everyone is mad.

Tell everyone that the former preacher had told you this was how you preferred to do it.”

So the young preacher did that and it worked well.

He had been there about a year and a half when he tried to change the deacon position from being a life-long job to a position that rotated annually.

Well, this made the deacons really mad, and they were the ones who made his salary recommendation.

So he went back to the drawer and got the second envelope: “You did something to make the deacons mad and there’s talk of replacing you.

Tell them this is the official denominational policy; that you thought they wanted to comply, but it doesn’t make you any difference what they do.”

He tried this, and again it worked great.

You guesed it. After three years, he finally told the women’s organization that they were going to have to open the kitchen so that it could be used without a representative from the women’s group being present.

This put the women’s organization in open revolt. So he went back to that third and final envelope:

“You’ve been here about three years and you finally got the women’s organization mad. The only thing to do is prepare three envelopes…”