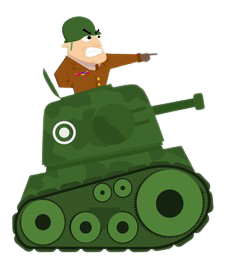 My general was making so damn angry by giving me extra work.
So i started thinking of a way to get back at him.
So i went around to all the people thank were a higher rank than me and asked them to follow me and if they would sign my release papers.
They all said hell no because i was only in the army for a year.
And so i went up to the general and asked him to follow me.
He did and i led him around all of the officers.
They all glared at him, and were writing things down.
And thats how i got a different general, but not out of the army.

A husband and wife are sitting

A Prisoner is digging a tunnel out of prison