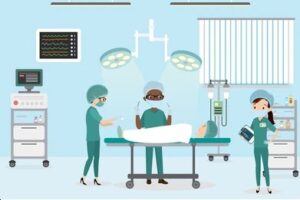 There was no electricity, the doctor handed the father-to-be a lantern and said, ‘Here. You hold this high so I can see what I am doing.’

Soon, a baby boy was brought into the world.

Whoa there, said the doctor, ‘Don’t be in such a rush to put that lantern down. I think there’s another one coming.’

Sure enough, within minutes he had delivered a baby girl.

‘Hold that lantern up, don’t set it down there’s another one!’ said the doctor.

Within a few minutes he had delivered a third baby.

‘No, don’t be in a hurry to put down that lantern, it seems there’s yet another one coming!’ cried the doctor.

The redneck scratched his head in bewilderment, and asked the doctor, “You reckon it might be the light that’s attracting them?”