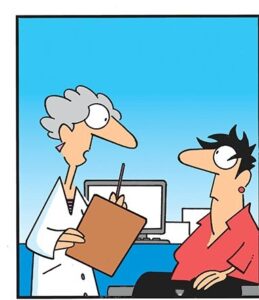 A noted psychiatrist was a guest speaker at an academic function where a famous politician happened to appear.

Politician took the opportunity to schmooze the good doctor a bit and asked him a question with which he was most at ease.

‘Would you mind telling me, Doctor,’ she asked, ‘how you detect a mental deficiency in somebody who appears completely normal?’

‘Nothing is easier,’ he replied

If the person hesitates, that puts you on the track..’

‘What sort of question?’ asked politician.

Well, you might ask, ‘Captain Cook made three trips around the world and died during one of them

Politician thought a moment, and then said with a nervous laugh, ‘You wouldn’t happen to have another example would you? I must confess I don’t know much about history.’

Elderly couple having an elegant dinner

A Man sitting at a bar