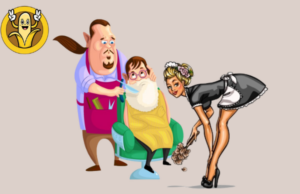 A man walks into a barber shop and says, “I’ll have a shave and a shoe shine.”

The barber lathers his face and sharpens the straight edge

while a woman with the biggest, most beautiful brsts he has ever seen kneels down and shines his shoes.

The man says, “You and I should spend some time in a hotel room.”

The man says, “Tell him you’re working overtime, and I’ll pay you the difference.”

She says, “You tell him. He’s the one shaving you.”

Store to Buy a Fishing