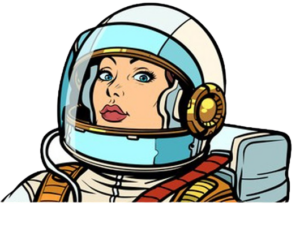 One day there were three astronauts a blonde, brunnete, and a redhead eating together.

The brunette said, “Hey you guys we were the first people in outer space we should be proud of that,” and they said, “Yeah, yeah we are.

Then they start to eat again when the redhead says “Hey you guys we were the first ones on the moon we should be proud of that too.” They said, “Yeah, yeah we are.”

The blonde starts thinking and about one hour later she says, “You guys, you know how we were the first one in outer space and the first ones on the moon?” They said, “Yeah, so?”

“So,” the blonde said, “We should be the first ones on the sun too.”

The redhead says, “You crazy blonde, if we got within a 100 mile radius of the sun we would burn up and die.”

The blonde replies, “Don’t be silly, we wouldn’t go during the day. We would go at night.”

Andrew at the Pearly Gates